Jaska Halttunen, 40-something cycling nature blogger, got a new bike some years ago and found love for cycling all over again. Soon his bike trips were longer and finally Jaska got an idea to bike the full length of Finland, from the south point of Finland in Hanko to Nuorgam, northest place in Lapland. With hardly no experience in camping he planned to pack just hammock and camp in woods. His over 2000 kilometres routeplan included trails, dirt roads and detours to Finland’s most beatiful nature sigths such as caves, ravines, rapids and other impressive places. Take a deep breath and and join the adventure. 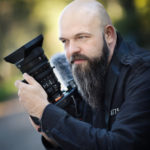 Guns and Guitars - a musical travelogue