After giraffes suffered a 40% decline in numbers — officially vulnerable to extinction — one South African scientist and his team are undertaking the expedition of a lifetime in order to save our planet’s tallest animal before they succumb to a silent man-made extinction.

CATCHING GIANTS is a heart stopping film following the world’s preeminent giraffe researcher, Dr Francois Deacon, as he embarks on the most ambitious giraffe research project to date: the attempted GPS collaring of 20 giraffes, including 10 males, which have never before been collared and that we know so little about. Giraffe bulls are notorious for being the most dangerous animals to capture in the entire animal kingdom. Joining Francois on this expedition are his family and scientists from all across the globe, each with unique backgrounds. To preserve this species, the team hopes to be the first to successfully collect semen from a wild giraffe.

CATCHING GIANTS takes viewers on an incredible journey alongside the conservationists who are making history on their plight to learn more about giraffes. The true value of this film lies in the fact that the results of Dr Deacon’s project and the discoveries made by this world leading team of biologists can be applied by wildlife managers and conservationists to giraffe populations throughout the continent of Africa. For Francois and his family, catching and saving Africa’s giants is not just a passion, but their mission. 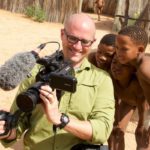