GANDHI, UNTOUCHABLES AND ME

Have you ever been aware or even cared that 300 millions of human beings are looked down as “untouchables.” In India the curse of being a nonentity remains like a plague from 1,000 BC until the present. This way of life that man’s inhumanity to man continues to be practiced in the land of Gandhi and Nehru. I like to share with you about the black spot in our Indian society called the caste system with its untouchables. I am not here to put down India or to tell you only half-truths. I am not Lord Buddha or Gandhi. It was not expected in 1954 when I was born as Narayana Rao Rampilla into a middle class family that I will be the advocate for the untouchables. My upbringing was in Vijayawada, a small Southern Indian town close to Madras. I was named after the Hindu god “Vishnu”. You might consider me a black sheep as my neighbors, family and friends were upset when I chose to their horror to deal with untouchables as equals. I grew up playing with them in the neighborhood. Funny thing, they just looked like me. It never felt as though they are different. We never played games like “hey untouchable” like your cowboys and Indians. For some reason even today I can’t comprehend why they are called untouchables. With this outlook, naturally, trouble was in the horizon. Can you imagine confrontation with my own family and friends on this subject especially when you are not a bad kid? My grades are satisfactory and what is wrong with me falling in love with a girl outside my caste? That is not what my family thought. Nothing changed even as an adult when I was at the national university in New Delhi surrounded by the so called leftist elements in 1981. Drawn innocently and reacting spontaneously with my conscience against the ongoing injustice on the campus, I was caught in the middle of a national debate and struggle. Hey, I ain’t no Che Guevara nor am I Lenin or Mao to formulate tactics and strategy to fight the established forces on the campus. But my knowledge came from my commitment to fight the age old injustice. Believe me I ended up going on an indefinite hunger strike against caste discrimination and I am not following Gandhi. But it is a tactic that worked in the past for others. Those were the happiest moments of my life. I wish I were dead than to exist every day knowing untouchability lives. Yes, I left for America in 1983. Then, had all this been a big waste? No. It is not all naught. In fact, it paved the way for the subsequent Mandal Commission Report in India, which addressed this issue but couldn’t resolve it. And then the recent suicide of Rohit Vermula at the University of Hyderabad and prosecution of Current President of the JNU Student Union on Sedition charges? To sum up my need to share my feelings…I mean…I can understand if you find all this boring…nothing do with you…but I hope you will give me this moment to vent. The subject has been part of my life for as long as I can remember. What is it they say if the tree falls in the forest and no one is around to hear it fall…does it matter? Well, so far as I’m concerned…the untouchables have been crying for their lives…but is and anyone listened? This film is a dramatized version of my life experience with my fellow brethren, named by Gandhiji as “Children of God.” 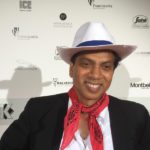 How did a diplomat and an international attorney end up becoming an actor in Hollywood? That’s a good question to ask Rao Rampilla, an American Actor based in New York City. He comes from a town called Vijayawada, India. His imagination has roots from the stories told to him by his aunt when he was a child. During college, he wrote poetry in the middle of the night sitting before an old table in front of a kerosene lamp. Rao published them next day in his paper “Jai Andhra Vaani” in support of the movement of the Telugu speaking people. Recently, Telugu people got an independent State in India. In the final days of college, he even learned Carnatic music from a local teacher and played the role of a poet in the play “Neeru Poyyandi” (Water it). That’s where he was artistically grounded. Having been discouraged from doing acting business or be a poet or a musician, he turned to the law. While at law school, Rao was inspired to become an International Attorney. So inspired he left a lucrative job and pursued his dream. After graduating from the University of Madras, he joined the Nehru University in New Delhi through the national competition. There he fought for social justice for Untouchables (Dalits) and was on an indefinite hunger strike. As you can imagine trouble was on the horizon and an expulsion issued. You would have thought Rao would then become a politician in India with the name and recognition he got. Instead, he choose to come to the USA and pursued his dream to become an international attorney. After studying with Late Dean Rusk, a former Secretary of State with JFK Administration, he reached New York. There he stumbled into Native Americans and he joined the Seneca Nation of Indians in their fight for self-determination and won a case for them on Casino gambling. When he returned to NYC he got into the office of Legal Affairs, UN on the 34th floor of the United Nations having written a model affirmative action legislation for women in Latin America for the United Nations Development Program. He was also appointed as a Special Counsel and a diplomat with Indonesia and hobnobbed with Dr. Kissinger. Then he moved on to work in and around the World Trade Center. He was there on September 11, 2001. Again his career took an unexpected turn. Learning that he was there nearly penniless two women sent him for an audition. He went and smiled and booked the, Super Bowl Visa Commercial with Kevin Bacon in 2012. Having done several national commercials with Hollywood actors, he studied with Alan Arkin and upon his advice has been working with Austin Pendleton of the Steppenwolf Theatre for the past 6 years studying Ibsen, Strindberg and Chekhov among others. He studies at the Juilliard School as well. After an audition, Adam Sandler gave him a chance to be on the set for That’s My Boy. While on the set, Mr. Sandler liked what Rao did and rewrote his part and gave him a major supporting role working opposite to him. That’s how my friends, Rao became an actor in Hollywood. Recently, he was cast opposite Liev Schreiber in the upcoming movie The Bleeder. He got invited to Cannes among other film festivals. He traveled extensively in Europe exploring the roots of the American Acting. So it’s not a surprise that he is having the time of his life and aspiring to play a role such as Dr. Zhivago.

Avellino - Rocchetta, the Suspension of Travel