Mother Tongue is a linguistic journey down the Danube River exploring the intersections and boundaries of identity, place and time.
The film explores attitudes towards neighbors, outsiders and borders within the Danube River Basin – from its German headwaters to its Romanian and Ukrainian delta. Giving voice to the nine major languages spoken along the river, the film encompasses linguistic, anthropological, sociological, and geopolitical dimensions. 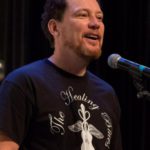 Ted Efremoff, born in Moscow, Russia, is a cross-disciplinary artist engaged with film and social practice art. He explores the personal and cultural constraints ingrained within prevailing political, economic, and social power structures.
The purpose of his work is to generate positive social change by challenging ingrained beliefs, questioning fears and rethinking behaviors.

Efremoff’s work has been presented in the US and internationally.
Shows include: The Museum of American Art in Philadelphia; Free Speech TV; Gongju National Museum in South Korea; The National Center of Contemporary Art in Moscow, Russia; The National Palace of Culture in Sofia, Bulgaria. His work is in
the collections of the Sound Museum of Rome, The Los Angeles Center for Digital Arts and the Culture House of Bad Sobernheim, Germany.