Join Naturalist, Biologist and Storyteller Erica Hargreave as she explores and makes new friends on Salt Spring Island around their mutual love of parks. Walk back in history to meet Salt Spring’s First Peoples pre-contact, visit BC’s oldest working farm that exemplifies the culture of sustainability that is Salt Spring Island, help Erica to hoot alongside one of the wise old creatures that has inspired so many local artisans, and join Erica in hugging and kissing a tree as she discovers the Islanders’ elixir to their youth and creativity. 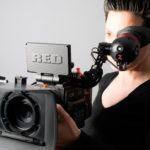 Kelly has been shooting, editing & directing for over 20 years & has had the opportunity to learn from some of the best filmmakers in the USA — from Oscar winning Sound Designers, to Sundance winning Directors — and an elite group of cinematographers. She received formal training at RED Studios Hollywood and has been a gear reviewer for Zacuto USA, Redrock Micro, Nikon Canada & Atomos Australia. She is extremely passionate about telling untold stories, framing and light, and creating an emotional impact for the audience. The latest short film that she produced, No Breath Play, had its North American premiere at the Portland Indie Film Festival before screening at 7 more festivals including: San Francisco, Memphis and Johannesburg, ultimately winning Audience Favourite at the Victoria Film Festival.