Christof Franzen worked ten years as a correspondent for Swiss television in Russia. In 2010 he traveled, by helicopter, to one of the most remote places of Siberia. There he portraied 10 years old reindeer-nomad boy Christafor. For Christof it was one of the most impressive experiences he made in his whole time in Russia. Since then, he is a Siberia fan.
Dave Leins, the director of the film, knows nothing about Siberia, despite its cold, harsh and remote.
Together with Christof Franzen he travels, this time on land, to this remote place and to the nomad boy again. Its a thrilling, fascinating and authentic journey to the limits of Russia, of civilization and the filmmakers themselfes. 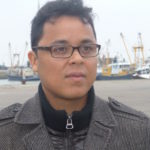