An animated whirlwind cinematic tour through Vienna, staged with cups, saucers, plates, knives, forks, local specialties and products interspersed with different dimensions of Vienna’s contemporary urban life. Using stop-motion animation, Virgil Widrich’s team made 55,000 photos over five days to produce 2.7 terabytes of data. „We would have had enough material in the end to produce a 38-minute film taking a playing speed of 24 images per second,“ he says. It took weeks of work to compress the message into the film’s present length. You do not need to leave a Viennese coffee table to travel through the whole city!
Commissioned by Vienna’s Staff Office International Strategy and Coordination 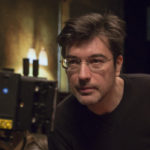 Virgil Widrich, born 1967 in Salzburg, works on numerous multimedia and film productions. His first feature film is “Heller als der Mond” (“Brighter than the Moon”). His short film “Copy Shop” won 35 international awards and was nominated for the Oscar. “Fast Film” premiered in Cannes 2003 and won 36 awards until today. His newest feature film is “Night of a 1000 Hours” to be released end of 2016. Virgil Widrich lives in Vienna/Austria.