Iceland is said to be the Mekas landscape for photographers. It is considered as the country of fascinating contrasts. Broadly known as “The Land of Fire and Ice”, it is home to both a portion of the biggest ice sheets in Europe, and probably the most active volcanoes on the planet. 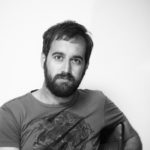 I was born in 1983 in Zakynthos, Greece. My main studies were in engineering, but I also attended lectures at “Focus school of Art Photography” in Athens.

I have participated in many art exhibitions, both in Greece and abroad. One of them was the APhf 2010, where I received the title “Young Greek Photographer” by the Hellenic Center for Photography. Furthermore, in 2014, my work was exhibited in one of the most prestigious galleries in New York, Agora Gallery.
My photos ”Vesturhorn Iceland” and ”Icelandic Horses” were selected among the 10 best photos of ”Travel and Nature’’ and ‘’ Wildlife’’ categories respectively at Sony World Photography Awards 2016, the biggest competition in the world, with 230.103 entries from 186 countries.
Furthermore I was finalist at Travel Photography Awards 2016 (TPOTY) in the portfolio section “Land Sea Sky”.

I live and work in Zakynthos, Greece