An Arctic Fairy Tale is a nature documentary film on the diversity and beauty of Northern Norway. The film is composed by nine individual time-lapse animated episodes. Each episode has its own main theme and displays either a) one of the arctic seasons (e.g. The Polar Night, Arctic Summer) or b) a special natural phenomena (e.g. Frost Smoke, Northern Lights). Chronological combined the episodes tells the story of one “Arctic Light-year” in Northern Norway. 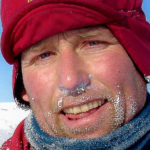