A climate-neutral journey by bike and kayak across the Alps.

The award-winning filmmaker Olaf Obsommer and his team travelled in July 2020 from river to river over the main ridge of the Alps. Always in search of the most spectacular wild rivers.

Everybody knows this satisfying feeling of having achieved something by their own efforts. Regardless whether it is the climbed mountain peak, the survived marathon run or even the longed-for beer garden after the long bicycle tour – you are simply happy and satisfied.
This philosophy is also behind the project »Bike2Boat«: With their own legs/under their own steam the four kayakers Olaf Obsommer, Jens Klatt, Adrian Mattern and Bren Orton worked their way up the pearls of the Alps by bike – the rapid descent on the wild streams were thus became an even more intense experience.
A plea for climate-neutral travel
At the same time, however, the athletes pursue other goals. While they normally jet around the world in search of wild water, leaving huge ecological footprints behind, they wanted to set an example for climate-neutral travel with Bike2Boat and at the same time escape the hustle and bustle of everyday life for a while.
Slowly, and without jet lag, the team experienced the beauty of the local Alps. On the bike there was enough time to process the impressions gained and to experience the country and its people up close.
The project
The team was on the road for three weeks in the saddle and in the boat. From the Upper Bavarian Inn Valley, they travelled around 700 kilometres and 8.000 metres in altitude through the Salzburger Land, past the Grossglockner to East Tyrol, towards the Staller Sattle in South Tyrol and over the Timmelsjoch into the Tyrolean Ötztal. On their way they paddled some of the best classic whitewater section of the Alps such as the famous Lofer Devil´s Canyon, the Isel cataract, the Defereggenbach waterfalls, the beautiful Reinbach waterfalls, the Passeier through Meran and last but not least the mighty Oetz River.
Everything Adrian, Bren, Olaf and Jens needed for their trip, they transported with their bikes: boat, paddle and kayak equipment on the bike trailer, everything else like tent, sleeping bag, clothes and food in panniers on the bike.
The boys draw on the experience of two previous Bike2Boat trips: in 2012 the team was on a pilot tour on the west coast of Norway, one year later they travelled 2000 kilometres and 22,000 metres of altitude difference from Cannes to Venice over the Alps. 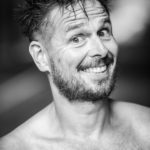