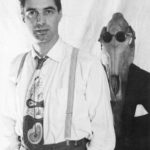 Phil Swinburne proudly maintains that he has never had a ‘proper job’.

He has been called a ‘late bloomer’ – he prefers ‘renaissance man’.

“Metropolis II: Highway to Heaven” is Phil’s first attempt at producing and directing. He hopes it won’t be his last.

INTO THE EAST - A BACKPACKING ADVENTURE