ONCE UPON A JUDGMENT DAY

Arife, who once lived in rural areas of Anatolia, make a living by telling stories to people at weddings, and her husband Dancer Civan, who entertained people by dancing in the same environments, suddenly has a heart attack while walking on mountainous terrain to catch a wedding. Witnessing the death of her husband in a cave, Arife remains helpless with the arrival of 3 bandits in the stories she constantly tells, hides herself in the cave. 3 bandits see Civan’s dead body. The bandits, who are suddenly irritated by the advent of Arife, draw guns to kill Arife. However, when Arife begins to tell the stories of 3 bandits with a mysterious, dramatic and unusual speech style, the bandits lower their weapons and listen to the stories of Arife with curiosity until the sunrise. The pain, troubles and secrets of the bandits have been fully revealed. Now the bandits will make a decision. Either by killing Arife, they will bury their secrets with her, or they will repent and leave their land. 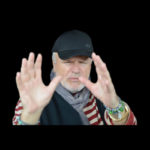 The colours of Mayo