A young mare visits Cyprus to take part in races. Frustrated from failure, she abandons the racetrack after confronting her strict father. The mare will meet new friends who will try to help her find her lost courage.

The incredibly talented people that contributed to this production made this film a joy to create.
This film aims to be appealing to a wide range of ages. So, no violence, no sex, no explosions! These apparent restrictions enabled the story to focus on the building of relationships between friends and the psychological challenge the protagonist is faced with.
Certain philosophical matters that subtly deal with questions such as racism and the path to success will be easier to be picked up by the more mature members of the audience.
In this film we also get to know Cyprus by seeing traditions in front of significant landmarks and by hearing Cypriot characters communicate in their native language. 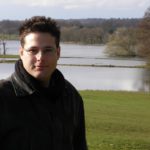 Alexis Chaviaras, born in Antwerp in 1978, has been teaching animation at Universities in Cyprus since 2009. Alexis has been generating media animation material since 2002 and is currently researching the field of scenic design for 3D computer animated films.

Once Upon a Time in Cappadocia