There have been so many documentaries and user generated films and feature films about Jesus’s last days in Jerusalem. My family took a tour set up for Christians and Jews–giving in unusual perspective of Jesus’s final moments of life. As the filmmaker, I see this as a travel film that hopefully gets viewers to want to visit this incredible location for themselves. 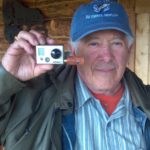 David Hoffman is a communications disruptive innovator (a winner of the Tribeca Disruptive Innovation Award). He an authentic voice who uses video in innovative ways to help others reach out to their audiences and motivate them.

Hoffman has 3 careers and he has done them simultaneously. He is a veteran documentary filmmaker with more than 150 network television shows and series, 5 documentary feature films, and hundreds of corporate, educational and short subject films to his credit. He has won just about every major national and international film award. Some of his films are viewable here.

He’s also a corporate communicator who has worked to help individual corporate leaders and companies to communicate their products, services and values to their target audiences. His clients have included AT&T, United Technologies, Sony, Google, and Amazon among the Fortune 100, as well as numerous startups.

He is also considered a YouTube and Google Adwords “guru”. He has helped companies and individual content creators find their audiences on YouTube and he has more than 60 million views on his YouTube channel where clips from his work are shown.

He speaks regularly at conferences and at film schools such as Johns Hopkins, the Columbia School of Journalism, and Hampshire College, among many others.

In creating and supervising LabTV mini documentaries, Hoffman is experimenting using extremely lightweight equipment to create what he calls “one-man band films.” Hoffman has also created a style that allows each individual land researcher to shine and present themselves in ways that motivate.

Roma > Athens (Love in the time of Mykonos)