10 Days in Saigon Trailer from Samuel R. Mendez on Vimeo.

Muui was founded in 2015 with a simple goal: to change today’s conversation about disability. We specialize in creative productions and the highest quality media content in order to tackle negative stereotypes and the societal stigma around people with disabilities.

Muui is a Sino-Korean word for “without meaning.” We envision a world in which an individual’s disability does not define them, and makes no difference, or “means nothing” for how you approach that person. We work in collaboration with top-quality teams from several fields to actuate this vision. 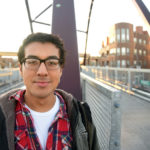 Samuel is a Chicago native who graduated from Harvard College in 2014, where he studied animation and global health. His undergraduate thesis film, A Bodega, showcased his interest in using animation/video to examine social issues, inspired by documentary aims.

His work focuses on the intersections between animation and live action, as well as fiction and nonfiction. Samuel’s films revolve around the themes of the metropolis, food, inequalities, and travel. His favorite materials to work with are fruits, vegetables, and entire cities.