Abraham Levy is an adventurer and an explorer who has crossed the Atlantic Ocean completely on his own. During 5 months and from Spain to Mexico, he has made the journey aboard the boat Cascarita only with a pair of oars. 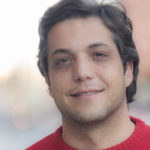 Francisco Ortiz Perez de Leon, better known as Paco Ortiz, born in Huelva on 1 March 1978. He studied Audiovisual Communication at the Faculty of Information Sciences of Seville. He has worked in newspapers “Cadiz Información” and “La Prensa de Huelva”. He has taught courses telegenia. In the audiovisual his career is linked very early to Digitsuit production company, starting as a video editor and continuing in recent years as a director of several programs for TV as “Sindica2”, “Emplea2”, “Destino Andalucía”, “Tu Agenda”, “Trabjo Temporal”… this company has issued on television, as well as TV spots and videos for companies and institutions, in 2011 directed the documentary film “Deportados 1969” which premiered at the European film Festival in Seville and was finalist IMAGENERA. In 2014 he begins with Felix Vazquez and Jose Carlos de Isla business adventure with Sarao Films SL and the result of this relationship can highlight the DVD “Real. Miguel Poveda” (2015) Latin Grammy- nominated 2013, documentary “13. Miguel Poveda”, premiered at the Festival de Málaga de Cine, awarded the prize “Pencho Cros” to the visual arts of the 55th International Festival del Cante de las Minas de La Union and also nominated in “Premios José María Forqué” 2016. Nominated to the best Editing category in the Andalusian Film Awards 2016 (ASECAN). Turn directs documentaries “Matilde Coral. Acariciando el aire” and “Rowing. Spain-Mexico” among many advertising jobs.