THE GERMANS – On Tour

Cäptn Krauses has a 12 meter long sailboat from the 70s – the Gypsy Spirit. On the Gypsy Spirit the three friends embark on a legendary trip to explore the Bahamas.
Challenges lurk everywhere whether on the high seas, in the board kitchen or at the beer pull. THE GERMANS is a mobil report that focus on three wayward krauts. They are always looking for the thrill or the next beer that descend the permanent efforts.
A holiday which is a never ending struggle for survival.
The Germans – On Tour! 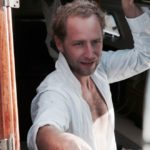 Producer for Commercials and Corporate Films.