Richard, a young American, ventures into the Pyrenees mountains, camera in hand, in search of information about the adventures of Mosén Bruno Fierro, a legendary character his grandmother told him about when he was young, and about whom he plans to do a documentary film. The experiences he has during these days will change his life forever. 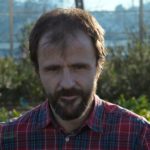 Graduate in Advertising and Public Relations from the Universidad Complutense in Madrid. In 1999 he began his professional career as a producer of promotional spots and trailers for various TV channels (Disney Channel, Paramount Comedy y Studio Universal among others). He was a scriptwriter and a producer of documentaries, and currently, since 2006, he is a producer of promotions and a post producer of programs for Aragón Television working on Factoria Plural. Also since 2006, independently, he directed video clips and short films as “Banastón Felino Star” (2006) or “Caradura” (2007). In 2008 he founded the production company Toma XL, in which the production of the short documentary “Waiting for Maitena” (2008) and the short film “Runner” (2008), which he wrote and directed. In 2010, he created Maxifilms Producciones, with which, among other works, performs the script, production and direction of short film fiction “Figure” (2011), the documentary “With a melody in his head. 1925” (2014), and short fiction-documentary “Discovering Mosen Bruno” (2015).