Daniel, a parent goes to the Tenant population, is the year 81 in the American Southwest, the sun is beating down and passes the old familiar chevi bill. Daniel gets thrown roadside of a sea shore. In this place there are very few cars, it is not advisable to travel alone if those ditches talk… 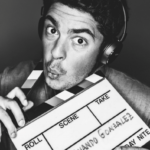 Aeronautical Engineer, self-taught film training, in 2004 made his first audiovisual work, his advertisement “Hunter” for Amena. From this moment is involved in the production, script, direction and editing by Alfonso Cabello and Niko Verona with numerous projects carried out under the production of Fanda films. From this moment to present he has been involved in more than twenty short films. In the very first times the projects was produced as a practice, is in 2012 with his project “Viande Rouge” when he starts to distribute their works. Since this year his works has been present in important film festivals like Sigtes Film Festival, Malaga Spanish film festival, Grossmann Fantastic Film among others. Also his works have obtained several awards around the world. Among his short films it is important to note: ‘Y de postre, qué’, ‘Locos por el cine’, ‘Mamá, quiero volar’ or ‘The Working dead’.