3 Tuk Tuk, 3 Teams, 11 travelers, 18 days of travel, more than 2500 km across southern Ethiopia. The mission? Have fun while promoting a slow and responsible way of traveling. The record? Be the first in the history to reach the Omo River on board of three-wheeler. 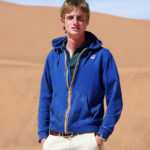 “Voyage autour de ma chambre”, we are in 1794: Xavier de Maistre, due to a duel, is placed under house arrest for 42 days. During his reclusion he wrote his autobiographical tale, “Journey around my room”, in which describes, with photographic eye – before the birth of photography -, all the objects that surrounds him in his room of confinement of 36 square feet.

I was born about two hundred years later, more precisely in 1984 and I started to travel very soon, but I elected to “room” not the 36 square feet of my descendant Xavier, but the whole world.

My father gave my a Contax when I was only 8 years old and I immediately began to photograph, passion that I have turned into a profession after graduating in Law in Turin.

I visited Africa several times, I lived in France, New Zealand and Ireland, I have traveled across the Americas, Canada, India, Indonesia and Japan.

As soon as I could I founded Studio Taurinorum, production and communication company specialized in branded content, documentaries, reportages and video productions and in the organization of promotional roadshows of vehicles and outdoor products all around the world.

In 2009, along with two of my closest friends, I went through Senegal, Mali, Burkina Faso, Benin, Nigeria and Cameroon with an old 1987 Fiat Panda. This Adventure was published by many Italian media that have made possible the first major collaboration of my Team with the first big client, Piaggio SpA.

In 2011 I organized a tour of Ecuador and Peru aboard a three wheeler for the 100th anniversary of the discovery of Machu Picchu. In 2012, to celebrate the end of the Maya World, we have crossed Mexico, Guatemala and Belize always with a tuk-tuk: both adventures have been narrated by Kilimangiaro on Rai 3, one of the most important television programs in Italy.

In 2013 I have started a collaboration with Iveco to promote the Daily 4×4 throughout the African Continent and the FIA (Federation Internationale de l’Automobile) to promote road safety around the world. This project was called Daily4Africa.

Since the beginning of 2014 I am official photographer of the Pentax Photography Team and ambassador for Panasonic Lumix in Italy and in 2015 I have started to produce videos for historic houses in Italy, hotels and accommodation of various types and companies.

In 2016 I have created an editorial video format called “The World in Slow Motion” that airs every Sunday on Rai 3 in the TV program Kilimangiaro.

I live with my wife Cristina in Borgo Cornalese, Villastellone, where I organize cinema and television productions and I am committed with my family in the development of a major project of restoration of which I follow also all aspects of media production, communication and press office.

The skills acquired in past projects and during the commercial roadshows around the world have allowed me to structure innovative communication strategies based on storytelling that allow every customer to get maximum visibility, optimizing his available resources.

The ancestor Xavier traveled along 36 feet of his room, I preferred to stay off and chose to travel along 130 million feet, roughly the circumference of the Earth.