'HIKO in Tonga - A Culture Almost Lost' Trailer 2019 from Paprika Leaverton on Vimeo.

A multi-generational film of a unique, vanishing culture of Polynesian women jugglers in The Kingdom of Tonga. Their unique style and approach is only in this tiny country of 150 islands in the middle of the Pacific Ocean.

Enjoy empowering insight into the late Queen Salote, the only Queen of Tonga. She influenced the women and the Cultural Dance such as Hiko and became friends with Queen Elizabeth as she put Tonga on the map in 1953 at the British Coronation.

Hiko is life. Hiko gives happiness. Hiko inspires all women and girls, and no Tongan men juggle. These beautiful women can truly call it their own. 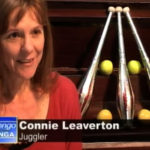