MasMan is about Peter Minshall, an existential hero in Trinidad and the largest novel character among carnivals anywhere in the world. For four decades he has had audiences in his mirror, which he calls mas, not masquerade, because his graphic imagery of society is much bigger than that. It is largely about who we were, what we’ve become and why we haven’t changed. Though some of his carnival presentations are indisputably positive, the seven deadly sins remain his overarching theme. Indeed, he captures society so eloquently; his mobile gallery literally rubs up against upper-crust art.

It is about a man from a tiny Caribbean island who reached 80 percent of the planet in a single night. MasMan explores Peter Minshall’s leap from designer in the Trinidad Carnival to an artistic director of the Opening Ceremonies for three Olympic Games, based on his knack for “making what is small seem big in open space.” Minshall was instrumental in staging the 1992 Barcelona Games, Atlanta (1996) and Salt Lake City (2002), for which he won an Emmy. Olympic Games producers found Minshall’s genius for orchestrating grand spectacles in the Trinidad Carnival, where his themes usually play on good and evil. His platform has been “the Mas,” which he brings to the streets as theatre, or dancing mobiles, way beyond the horizon of masquerade. 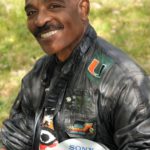 DALTON NARINE, executive producer and producer/director of MasMan, is an award-winning Florida writer and documentary filmmaker.
Born in Trinidad, Narine migrated to the United States in his late teens. His cinematic focus has been largely on Trinidadian art and cultural traditions – writing, producing and directing films about the carnival for Trinidad & Tobago Television during his annual two-week vacation.
He has won Best Caribbean Film awards three times.
His latest film, MasMan (final cut), subtitled Peter Minshall, Trinidad Carnival Artist, is neither story nor biography, but a portrait of a designer who received the Prince Claus and Emmy awards for a body of work that includes three decades of thought-provoking human interest Carnival presentations, as well as his artistic direction of Opening Ceremonies at Olympic Games in Barcelona, Atlanta and Salt Lake City.
A print journalist, Narine wrote for the Village Voice while still a student at Brooklyn College and New York University. He joined Eastern Airlines and moved up the ranks to assistant manager of public relations.
Narine became associate editor for Ebony magazine, an editor at the Fort Lauderdale Sun-Sentinel and a features editor/writer at The Miami Herald. He won writing awards at Ebony and The Herald.
The Miami resident, a decorated veteran of the American war in Vietnam, has begun a screenplay about the human condition as it pertains to the constant fluctuations of battlefield and post-traumatic survival.