Wanderlust accompanies two women, from different origins, on their journey by land and water from Egypt to Germany. As they set out to investigate the experience of the female traveler they focus on their own perspective of crossing places and spaces, emphasizing how the experience of traveling with a woman’s body is different from traveling with a man’s body.
Wanderlust is a filmic journey from Africa to Europe that invites you to take a leap and to discover, as few films do, the beginning of a friendship between two women. 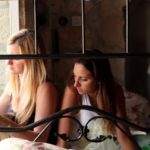 María Pérez Escalá is a lecturer in the Audiovisual Arts Centre (Realización y Lenguaje Audiovisual) of the National University of La Plata (UNLP) and works as a freelance photographer and independent filmmaker.
She was selected to direct one of the ten musical episodes that where produced by the Cultural Institute of the province of Buenos Aires and Sonido Ambiente. She received her degree in audiovisual Art at the National University of La Plata (UNLP). She specialized in the documentary field by attending seminars, workshops and masterclasses with Jose Luis Guerin, Patricio Guzmán, Miguel Mirra, Cristian Pauls and Marta Andreu.
She also participated in the workshop “The construction of documentary in the audiovisual field” at the prestigious International School of Film and Television in San Antonio de los Banos in Havana, Cuba.

Anne von Petersdorff is a PhD candidate at Michigan State University, USA. She completed her Bachelor in International Tourism and Leisure with a specialization in Strategic Business Management (NHVT Breda, Netherlands and Vrije Universiteit Brussels, Belgium) and a Master in Culture-Language-Media (University of Flensburg, Germany). During her Bachelor and Master she also studied in Mexico and participated in the workshop “The construction of documentary in the audiovisual field” at the prestigious International School of Film and Television in San Antonio de los Banos in Havana, Cuba.
She worked as a production assistant and post production supervisor for TV commercials in Hamburg, Germany and Milan, Italy. She also worked on the production of “Deutschland 09” and as a line producer for the short film “The Last Fare”.

THE LIVING MAP OF LABASTIDE