Beyond Mountains - Teaser from ted alkemade on Vimeo.

Within a group of 29 experienced and inexperienced climbers, Sheila, Anita and Ben take on a personal challenge, the Kilimanjaro. A mountain that is known to be quite easy turns out to be more challenging than expected. The mountain connects the three characters through the mental journey that each endures during the trip.

Sheila (28) physically tests her body after recovering from a motorcycle accident. Anita (50), on one hand, tries to deal with the incapability to have children. At the same time she’s processing this with the recent passing of her mother. Ben (73), a neuroprofessor, wants to know what he is capable of, given his age.

The personal stories, dreams and wishes of the participants are held against the backdrop of the mountain. Which makes the different stories universal and relative in relation to each other. The film tells us that as a person we are self-reliant and all looking for the same. And that is, happiness. Whatever circumstances we are in.

In this poetic documentary about hope and desire, the camera floats through the film like an extra character and portrays people in a way that is sincere and uninhibited. The aesthetics of nature alternate with the quiet pace of long walks.

The gathering of this group of climbers was driven by a collection campaign of War Child to help children at war. 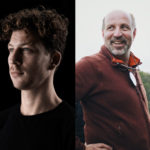