In June 2016, our two man team completed the first ever source-to-mouth expedition along the Kwanza River in Angola. We used a 40 year-old foldable wooden kayak that we paddled and carried along the 1,300km journey. This trip retraced some of the steps of sixteenth century English explorer Andrew Battel and recorded information on wildlife and human activity along the remote stretches of the river. So far we have raised over USD25,000 for The HALO Trust, an organization specialising in the removal of the debris of war, such as landmines. Our journey is currently being reviewed by Guinness World Records. This is the story of how we did it. 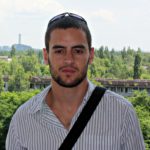 Oscar Scafidi is originally from the UK and Italy and spent five years living and working in Luanda, Angola as a history teacher. Before this he was based in Khartoum, Sudan. When not teaching, Oscar also writes travel journalism focusing on difficult destinations, such as Somalia, Afghanistan, Liberia and East Timor. Some of his work can be found on Sean Rorison’s website Polo’s Bastards (www.polosbastards.com). In 2016 Oscar wrote the first ever English language guidebook to Equatorial Guinea, one of Africa’s least visited countries.

Journey to JOYCE'S VILLAGE – Creating the Place of Hope

2 Responses to “Kayak The Kwanza”